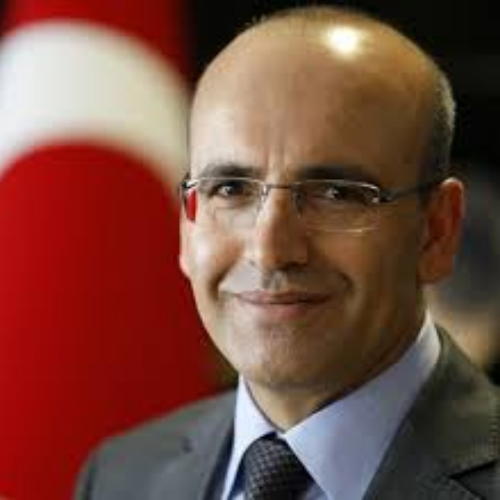 Former Deputy Prime Minister of the Republic of Turkey

Mehmet Şimşek serves as a Deputy Prime Minister of the Republic of Turkey since November 24, 2015, responsible for the management of macroeconomic policies. He previously served as the Minister of Finance (2009-15), one of the longest serving Finance Ministers of Turkey, and as the Minister of Economy (2007-09).He was elected to the Parliament in 2007, 2011 and 2015 representing the Justice and Development Party (AK Party).DPM Şimşek has formulated fiscal policy which has helped Turkey recover strongly from the global financial crisis. He has also undertaken far reaching reforms founding the Tax Audit Board, simplifying tax regulations, enhancing taxpayers’ rights, and reducing the shadow economy.Before entering politics, he worked for Merrill Lynch in London for seven years as an economist and strategist and later as head of Fixed Income Strategy and Macro Economic Research for the emerging EMEA region.From 1998 to 2000, he was a senior economist and bank analyst at Deutsche-Bender Securities in Istanbul. Earlier in his career, he worked on Wall Street for UBS Securities in New York (1997) and as a senior economist at the US Embassy in Ankara (1993-97).DPM Şimşek holds a B.S. in Economics from Ankara University and worked as a research assistant in the University’s International Economics and Economic Development Department.He also studied in England after being awarded a Turkish State Scholarship. He holds an M.PHil in Finance and Investments from Exeter University.DPM Şimşek is also a member of the Global Economic Symposium (GES) advisory board.DPM Şimşek was born in 1967, in a small village in Batman, a province in Southeastern Turkey. He is married, has twin girls, and a boy. He is fluent in Turkish, English and Kurdish.DPM Şimşek was nominated as one of the 500 most powerful people on the planet by Foreign Policy in 2013, and awarded as the "Finance Minister of the Year for Emerging Europe 2013" by Emerging Markets magazine.