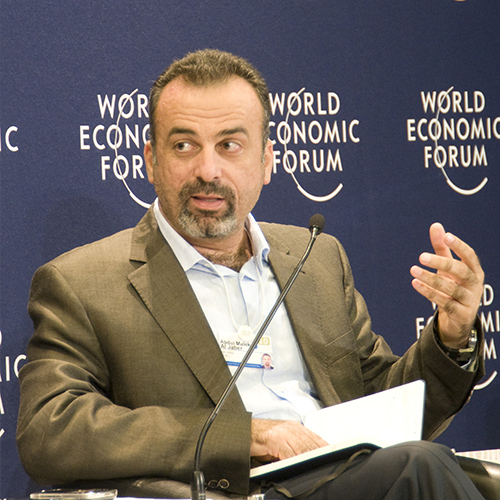 Dr. Abdul Malek Al Jaber has a wealth of experience and a long record of achievements locally and regionally in the ICT, Services and Financial industry. Dr. Al Jaber is the Founder and Chairman of MENA Apps, the former COO of Zain Group and CEO of Zain Jordan. Prior to joining Zain, Dr. Al Jaber served as CEO and Vice Chairman of Paltel Group where he was also responsible for profits growth from $15 million to $100 million in a record time. During his tenure, the Paltel Group became the first Palestinian company and 2nd in MENA to adopt the Global Reporting Initiative (GRI) standards on Corporate Social Responsibility and Sustainability Practice and Reporting, as well as the first company in the country to form a corporate foundation. Dr. Al Jaber serves as chairman of the Golden Wheat Mills Company and is Chairman of Middle East Payment Services, leading payment processor and acquirer in the Middle East. He also sets on a handful of regional and global boards of companies and institutions. In 2010, Dr. Al Jaber was ranked by Global Telecoms, # 62 on its annual power 100 list. He is the first Jordanian recognized on this list. Again and in 2011 the same organization ranked him # 69 and # 70 in 2012. In addition to this, he was also ranked number 21 in the top 50 most powerful people in the Media, Marketing and Advertising in June 2011. He was also awarded by HRH Sheikh Mohamed Bin Rashid PM of UAE as Best Arab Manager. Dr. Al Jaber is a member of the Arab Business Council, WEF, The Arab Technology Forum, YPO and the Global Agenda Council. Dr Al-Jaber is a member of the Advisory Council of Kuwait National Fund for Entrepreneurshio, Chairman of Oasis Venture Fund and Founder or Arabreneur.