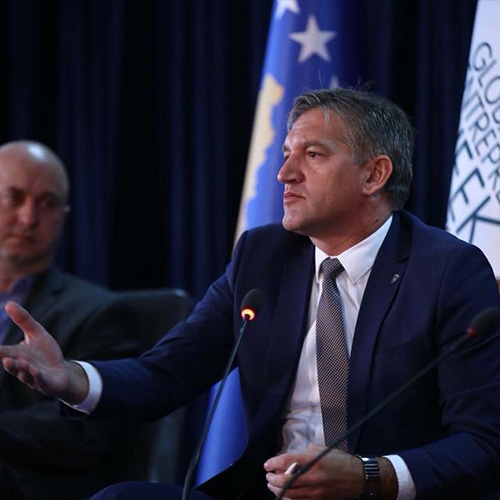 PhD. Besim Beqaj is newly appointed Minister of Innovation and Entrepreneurship on 9th of September 2017. Before being appointed as a Minister in the Ministry of Innovation and Entrepreneurship, Mr. Beqaj served as a Member of the Parliament of Republic of Kosovo during the previous legislature. Prior to this, from 2013 until 2014 Mr. Beqaj was Minister of Finance, from 2011 until 2013 was Minister of Economic Development, from 2010 until 2011 was Minister of European Integration. Mr. Beqaj was also Political Advisor in the Prime Minister’s Office in the Republic of Kosovo and simultaneously, he was appointed as National Coordinator for the Stability Pact for South Eastern Europe. Mr. Beqaj served as President of the Kosovo Chamber of Commerce from 2005-2010 and has been re-elected for two mandates. During that period, achieved to raise business community association as one of the main factors for the economic development in our country.Mr. Beqaj obtained the title of BSc. and MSc. and Doctoral Studies (PhD) at the University of Zagreb in Croatia. And also completed the European Doctoral Program in Management and Management of Small Businesses at the Autonomous University of Barcelona, Spain and Vaxjo University, Sweden. In addition, Mr. Beqaj has completed the PhD in Development and Management of New Products in Kosovo at the University of Prishtina.Mr. Beqaj was part of the Fulbright program where he has lectured and conducted academic research in the field of Economic Integration in South East Europe at the Illinois Institute of Technology, Chicago Kent College of Law. Moreover, his experience is enhanced by academic teaching, as he has the status of the Academic Professor at Public University “Hasan Prishtina” since 1996, where Mr. Beqaj lectures International Business. In addition to Albanian language as a native language, Mr. Beqaj speaks fluently English and Serbo-Croatian, and also is served with German language.